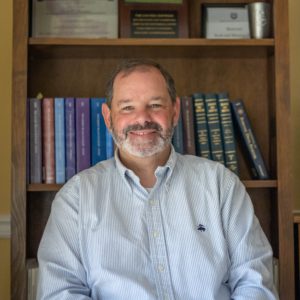 Born in Brooklyn, New York and raised in Somerset, New Jersey, K. William “Billy” Scott moved to Delaware in 1997. For his undergraduate career, Billy attended Villanova University and graduated with an English degree. He then went on to attend Villanova University School of Law, receiving his J.D. Early in his career, Billy clerked for the late Honorable Frank X. O'Brien of the Court of Common Pleas of Philadelphia County, Orphan's Court Division, where he authored several published opinions on wills and estates. He formerly worked as Associate General Counsel to the Carl M. Freeman Companies, which brought him to Delaware, and he was integral in the acquisition, financing, development, construction, leasing, sales, and marketing of numerous award winning real estate projects. In 2003, Billy left his position at Freeman and founded the Law Offices of Scott and Shuman with his late father in-law, Arthur “Buzz” Shuman. The firm was originally located in Fenwick Island, Delaware, before relocating to Bethany Beach in 2013. Scott and Shuman is proud to now have two offices in Bethany and Rehoboth Beach. Billy is a member of the Sussex County, Delaware, Maryland, Pennsylvania, and New Jersey bar associations. His primary areas of practice are real estate, wills and estate planning, and corporate law. He represents numerous companies, including many national, regional, and area developers, builders and real estate agents, as well as area businesses. Billy has worked on a wide range of real estate transactions and financings, including acquisitions and dispositions of large undeveloped parcels, golf courses, shopping centers, residential and mixed-use communities, and commercial properties. He has also created, acquired, and sold numerous construction, development, contracting, realty, rental, mortgage brokerage, and title companies. In his spare time, Billy enjoys spending time with his wife, three kids, and two dogs, and he loves to play (and watch) tennis. He is a true New York sports fan, and roots for the Giants and the Mets.